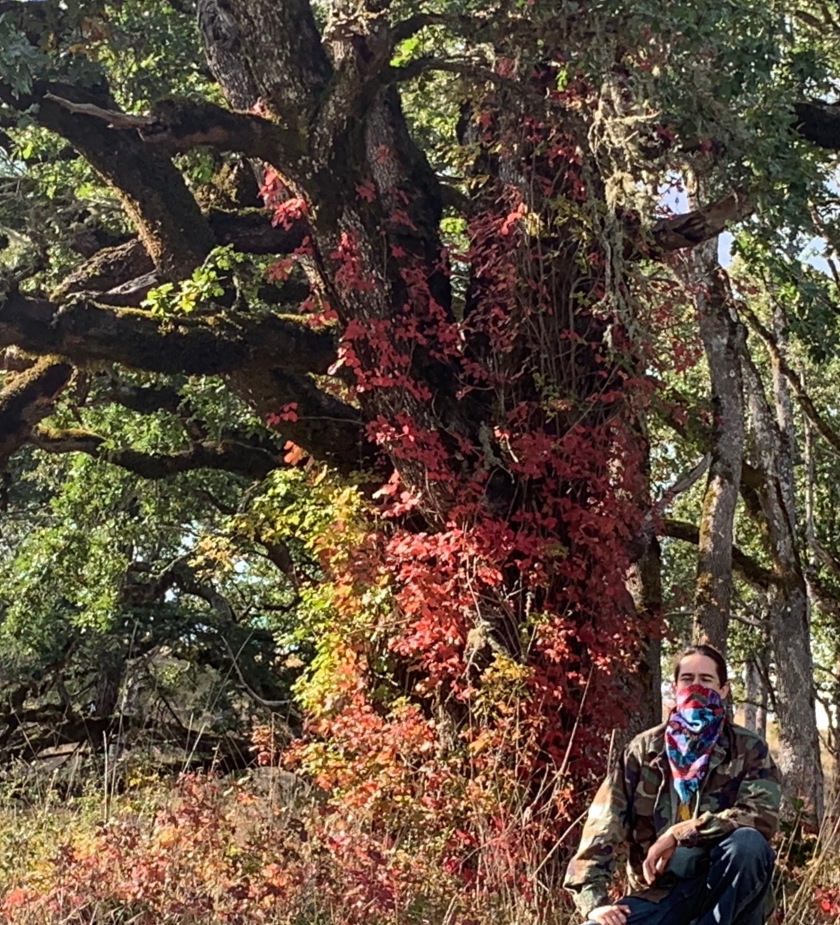 Decision to take action for global youth climate strike was a chance to try to unite and get some new energy to continue our current efforts to protect wolves knowing the struggle to protect wolves is related to all life because its tied directly to the land/habitat. I remember after putting a lot of organizing effort into this and being met with the usual deplatforming and conspiracy to deny my civil rights that the left is still terrible at supporting indigenous resistance and is bent on white supremacy in the environmental movement at all costs. A poster read (Local solutions to climate change) I defaced a poster and crossed out local and put the word white in its place. I felt the slogan white solutions to climate change being more fitting. Seeing youth of color used as mouthpieces and shields to prevent radical action from taking place. I acted by contacting 350 pdx and Unitarian Universalist National ect and fire back at them for a decade of racial exclusionary tactics by local branches of their organizations in an attempt at responsibility and accountability.  Our current stance with 350 is were asking them to disband having no consent to operate on our land and having a poor improvement record for so long. With no faith in their improvement its my believe they should dissolve themselves. A report on cities and racism to be filled out for the U.N regarding racism in kkkorvallis being brought to the attention of the Mayor. I organized in public to try to gain more participation from the public and the lack of support confirmed we should change or go underground until what seems is an apathy spell has been lifted. After meeting with limited results from the usual suspects of the white liberal world i went back to where i knew i had a better chance, the poor and economic/environmental refugees the homeless of whom 13 percent are native. The homeless did respond filling one of our slots as a drummer. He is known for sake of security only as Coldwind. I resent the time lost i spend trying to reach the privileged. I think its an abuse of teachers but that seems to be a colonial trend. Indicative of its treatment of the wolf the ultimate teacher and ultimate colonial animal. When we protect the wolf we protect everyone and everything”. I also resent trying to have to compete with NGO’s and do fliers and posters using more paper. Meeting in person being so much better. We tend to have a yearly rendezvous for that which usually meets with poor attendance i think due to the same whitecentric organizing that is wasting the paper. I find myself dreaming of a day we collectively awaken and take spiritual action and open a can of spiritual whoop ass. Im satisfied at this point with our own performance however given the terribly difficult circumstances. Day one we did a direct action warm up and i taught in a way where people can learn by doing. We used the Anishinabe Wolf song which is a big part our movement. The wolf song is a purification song and a Sun Dance song The power of the drum and a song is real and profound i can’t stress that enough. Looking back i think it was good practice. The office staff were good sports about it and behaved at least in a way favorable to their own attempts at constitutional free speech free expression. Had we been blessed with the strength of the right team with more hands and hearts we could have done more. A big part of the movement is showing up. Next is showing up in a meaningful way having done self work and ready to follow directions of the rightful stewards the indigenous resistance and those most decolonized voices among us. As was the case for some of the mouthpieces and shields used against us the colonized native has been the enemy of the traditionalist since colonists arrived. Keeping wolves in the media is something i have an agreement to do so i did it. I will at least be able to circulate this blog you are reading now. You can assist by sharing it widely. We did two direct actions over the course of the week which was the amount of days we had people willing to go forward so our performance is directly linked to your participation. We had a direct action training by Deep Green Resistance of which im a former chapter leaders for. The training seemed promising and came as a blessing for which we are grateful. Indigenous people are nature itself. I reflect on poison oak. It grows where forests have been wounded or traumatized. Bright red in the summer it serves as a warning and acts as a poison guardian. It effects humans not animals that i can think of. Like a poison oak we make it uncomfortable for the colonizer to colonize. The last shall be first and the first shall be last. As Frantz Fannon pointed out is the result of anti colonialism. Satisfied enough to be capable. Climate strike included pipe ceremony and we used the wolf pipe given to us by Potawatomi Warrior Society. On my mind now is how to literally return the land to indigenous rule, Restoring power and literally returning the land. I caught a taste of Edison the Medicine Chiloquin’s dream . Prepare to be potent and present in the time of the 8th fire prophecy. Preparing to run to Mexico with Peace And Dignity Journeys. Reflecting on teachings from Eddie Benton Banai, Harry Charger. Reaching out to Holy Men and Indigenous Warrior Women. Thunder sounds across the sky and we gather the lightning rain to drink. Lightning put nitrogen in the ground and things grow. Green obsidian.